We Are Conducting Telemedicine Visits! Book Your Visit or Learn More 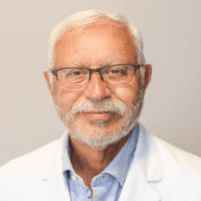 Mole removal is performed by Dr. T. Joseph Raoof of the San Fernando Valley in Encino, California, for both cosmetic and medical reasons. If you are in the Greater Los Angeles area and have a mole that you find suspicious or simply would like removed to improve your appearance, call the office for a consultation.

Moles occur when cells in the skin start to grow in a cluster. These skin cells are known as melanocytes. They are dispersed throughout the skin on your body to give it color.

Most people start noticing moles in early childhood, and during the first quarter of life. It is perfectly common to have as many as 10-40 moles by the time you reach adulthood. Moles generally appear brown or black in color and can show up anywhere on the skin. Moles may appear singularly or in groups.

Why would I get moles removed?

The majority of moles are benign, or harmless. Moles may change over time, growing hairs, disappearing or shifting in color or texture. However, if a mole appears after age 25, or if it changes dramatically in color, size, height, or shape, you should have it examined by Dr. Raoof to rule-out skin cancer. In addition, to changing appearance, moles also need to be checked out by a doctor if they itch, ooze, or bleed.

You may choose to get a mole removed if it bothers you due to rubbing against your clothing, or if you find it unattractive or undesirable. However, moles should also be removed if they can potentially develop into cancer.

What happens during mole removal?

A doctor specializing in medical and cosmetic dermatology such as Dr. T. Joseph Raoof has the ability to remove moles in his office on an outpatient basis. Moles are usually removed either by surgical excision, or a surgical shave.

Surgical excision involves surgically cutting out the mole and stitching the skin back together. If your doctor is suspicious about the mole, the tissue is sent to the lab to check for cancer with a procedure called biopsy. Surgical shave is done when your doctor uses a special blade to cut off the mole.

RAOOF MD Dermatology accepts most major PPO insurance plans. No HMO plans are currently accepted for Medi-Cal or Medicare patients. Due to the nature of the services offered at our office, we require pre-payment for selected treatments which our office can review with you at the time of your visit. Patients may be eligible for insurance reimbursement for these treatments based on their current plan. If you would like to verify your eligibility or benefits, please contact your insurance company directly. Our office is available to answer any questions.